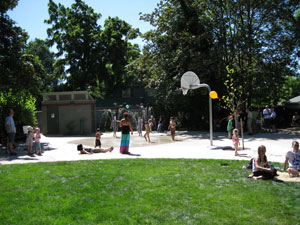 The Fairmount Neighborhood owes its name and many of its unique characteristics to a short-lived 19th-century development known as Fairmount City. Annexed into the city of Eugene in 1902, this development’s legacy is preserved in generously-sized residential lots, the curvilinear design of Fairmount Boulevard, and a large neighborhood park, part of which was later incorporated into Hendricks Park. The Fairmount Neighborhood has since ascended into the forested hills to the south and east, and is now contiguous with adjacent Eugene neighborhoods.

Fairmount’s eastern boundary lies along a ridgeline terminating at Judkins Point, with the Willamette River forming the northern edge, the University of Oregon bordering on the west, and 30th Avenue at its southern-most terminus.

Within our borders are four city parks: Hendricks, Washburne, Mission and Fairmount. They provide residents with a variety of recreational uses. Sidewalks and older homes make the neighborhood popular with people walking dogs, and families out for a stroll. It is common to see joggers, cyclists, and runners from the University of Oregon track team in the neighborhood, due to our proximity to Willamette River pedestrian / bicycle paths. Hillside trails in the century-old, 78-acre Hendricks Park are also favored by runners, and "Track Town" really comes alive in Fairmount when Eugene’s annual marathon packs the streets with participants and onlookers.

Fairmount residents present a diversity of age and occupation, and many long-established families can be found gathered at one of the neighborhood parks during Fourth of July celebrations. The stability and friendliness people experience in the Fairmount Neighborhood give residents a shared sense of pride in our corner of this dynamic city.